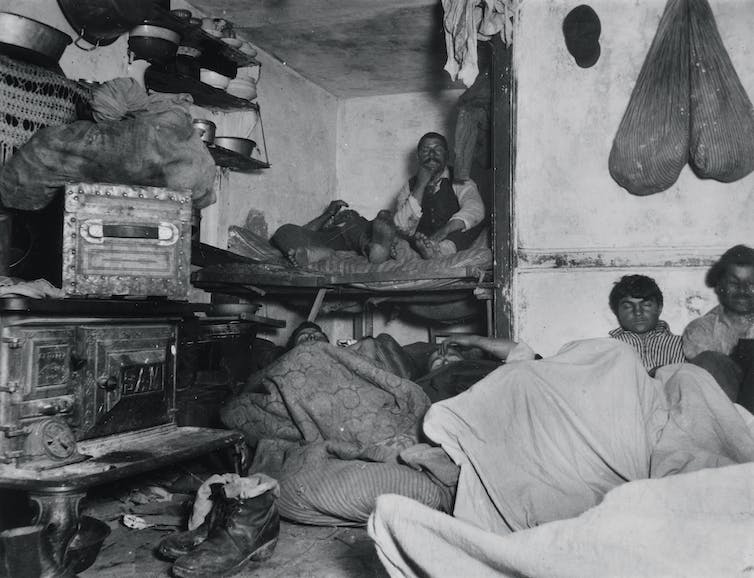 The return of the historic problem of overcrowded dwellings points to a need in Australia for better understanding of the causes and regulatory responses.
Jacob Riis (1889)

What exactly do we mean by overcrowding?

Pressure in the affordable housing sector has led to increases in overcrowding. Media reports describe situations of “ten people in a two-bed unit”, “58 beds crammed into 19 dirty, makeshift rooms” and “ten people shoehorned into one bedroom, tenants sleeping in bathrooms, and in one case, a pantry”.

Living in severely crowded dwellings has been described as the most common form of homelessness.

Security and safety can be an issue when residents do not have privacy and control of their own space. But people sacrifice space and safety to secure affordable accommodation.

An example of the dangers was a fatal fire in an apartment illegally partitioned to create a fourth bedroom.

One such measure, the Canadian National Occupancy Standard (CNOS), is officially recognised in Australia. It assesses a household’s bedroom requirements using the following criteria:

Under this standard, households that need at least one extra bedroom are considered overcrowded. A shortfall of four or more bedrooms is severe overcrowding, with greater risks for health and safety.

One standard doesn’t fit all situations

Measuring overcrowding is not straightforward. The age and sex separation thresholds involve assumptions about the age of puberty and adulthood.

CNOS is the preferred measure of the Australian Bureau of Statistics, Statistics New Zealand and the Australian Institute of Health and Welfare (AIHW). This is because it takes the age and sex of occupants into account and matches our values and expectations of how space is used.

In Australia, it is usually acceptable for children of the same sex to share a bedroom before puberty. But we already know CNOS does not account for differing cultural expectations of the numbers of bathrooms and toilets, and the size of kitchens, bedrooms and living spaces. CNOS embeds assumptions that do not hold across ethnically diverse groups in Australia.

For example, a study of migrant suburbs in Sydney and Melbourne found “it is not uncommon to have families with two adults and five children sharing a two-bedroom property”. This is due to large family size and different cultural norms, including intergenerational occupancy of housing. Few properties are designed for this.

Traditional Pacific houses use living spaces rather than separate bedrooms for sleeping. A bedroom with more than two people is compatible with the attitudes of some Pacific and Mäori peoples to having a sense of adequate space.

Similarly, using the Canadian standard, Indigenous Australians are more than five times as likely to live in overcrowded housing as non-Indigenous Australians. This is alarmingly high and likely driven by high rates of socioeconomic disadvantage. We need to disentangle the extent to which values around space and its use versus socio-economic drivers of overcrowding underlie this statistic.

Do we need better measures?

So should we develop Australian-specific culturally sensitive standards? We think that depends on what we want to know.

Physiological stress and disease risk as a result of crowding occur for different ethnic groups regardless of whether they perceive themselves as crowded. Culturally specific standards may not be necessary when broadly examining the relationships between crowding and transmission of infections such as rheumatic fever, colds, asthma, influenza and meningococcal disease. Living in close quarters is relevant regardless of cultural norms of housing or nuances of measurement of crowding. Standard indices, while not perfect, capture this.

However, expectations about shared space might influence impacts on mental health. Social relations and family bonds are key social determinants of mental health. In particular, shared culture has been identified as a positive resource in improving Indigenous health. Current crowding metrics ignore non-bedroom-related uses of housing.

Crowding indices that capture the use of space – for example, incorporating subjective feelings that too many people are around – could be a step forward. Given our climate of wide temperature ranges and the high cost of utilities, such indices might also consider “functional overcrowding” – people sharing small spaces or beds due to concerns about heating/cooling and security.

Research on wellbeing would benefit from integrating a better understanding of the variety of needs of cultural groups and tailoring measures to our climatic conditions. However, such measures would be more subjective than current standard measures, more difficult to collect at a population level and less comparable with international standards.

What can we do about harmful overcrowding?

Cultural preferences mean low levels of overcrowding may not always be problematic. But overcrowding is a problem when generated by socio-economic disadvantage and when it compromises people’s safety and security. This is likely in cities where housing costs are high.

Broader measures are needed to improve the supply of affordable housing. This includes dedicated programs such as the National Rental Affordability Scheme (NRAS) and extra funding for social housing. Enforceable laws that go beyond the Public Health and Wellbeing Act in Victoria and NSW Fair Trading strata reforms are also needed to monitor overcrowding and avoid the negative impacts of severe overcrowding.

This article was originally published on The Conversation. Read the original article.