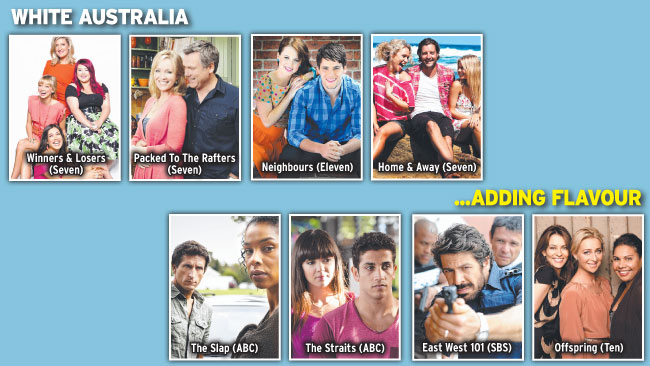 This week in BCM310 we looked at the issue of ‘white bread media’ and lack of culturally diverse representations in the media.

As a half-Spanish, half-Lebanese girl growing up near the location infamous for the Cronulla Riots in 2005, issues of racism and multiculturalism are of both interest and concern to me.  Throughout my life the Australian television shows that I have been exposed to, such as Neighbours and Home & Away, predominately portray the traditional Australian Caucasian “nuclear” family. Byrnes (2012, cited by Dreher, forthcoming) notes that these Anglo families ‘do not reflect who we are’ as a multicultural country in the 21st century.

This is concerning because, like Dreher says, the representations made by the media shape our understandings of society.

Actors such as Firass Dirani (a Lebanese Australian) have spoken out about how difficult it is for actors with an ethnic appearance to be cast in television programs; those lucky enough to be cast normally land the role of a stereotypical character of their nationality (Kalina 2012).  An example of this is Dirani’s role as John Ibrahim, nightclub owner and major crime figure, in Underbelly.

‘Neighbours’ tried to respond to the lack of cultural diversity by adding Asian character ‘Sunny Lee’ to the Ramsay Street community. I think Houston (2009) responds to this weak attempt to create diversity well by saying:

“So there you go. Erinsborough will now have one Asian resident. Unlike every other suburb in Melbourne, which has about one squillion.”

The biggest shame is what ‘white bread’ media is causing us to miss out on.  A diverse mix of characters of different ethnicities not only reflects the multicultural Australia that we live in but adds depth and colour, allowing for unique stories to be told.

Houston identifies that there have been a number of wonderful Australian dramas that have addressed issues of multiculturalism, such as ‘The Circuit’ and ‘Kick’. The important thing to note, however, is that these shows screen only on ‘SBS’. ‘SBS’ promises to “provide multilingual and multicultural radio and television services that inform, educate and entertain all Australians and, in doing so, reflect Australia’s multicultural society” (SBS 2013).  I believe this is the attitude that all television networks need to have; at present, it seems as if television shows with a multiracial cast are deemed by mainstream television networks as being not appropriate for broadcasting (Houston 2009).

Ultimately, it is about time that Australian television echoed reality.

We are a multicultural nation – our media content should not only reflect that, but embrace it.