There was pure power in that ocean, and I wanted it on film, but I could barely keep my feet or even see the water below me, for the gusting wind and the rain driving in my eyes. Most of all I had no wish to be closer to that churning, heaving water at the base of the cliff on which I rather precariously stood. Soaked and wind-blasted, I gave up and ran for the car. 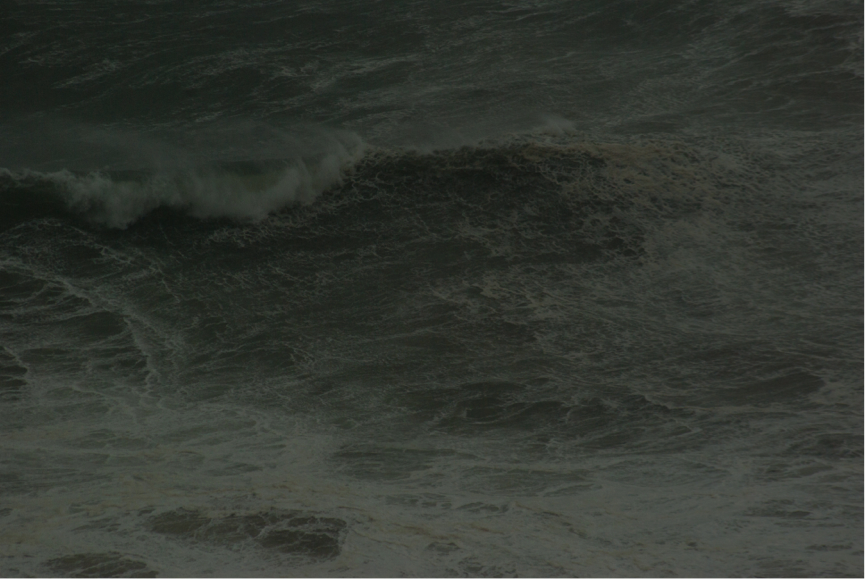 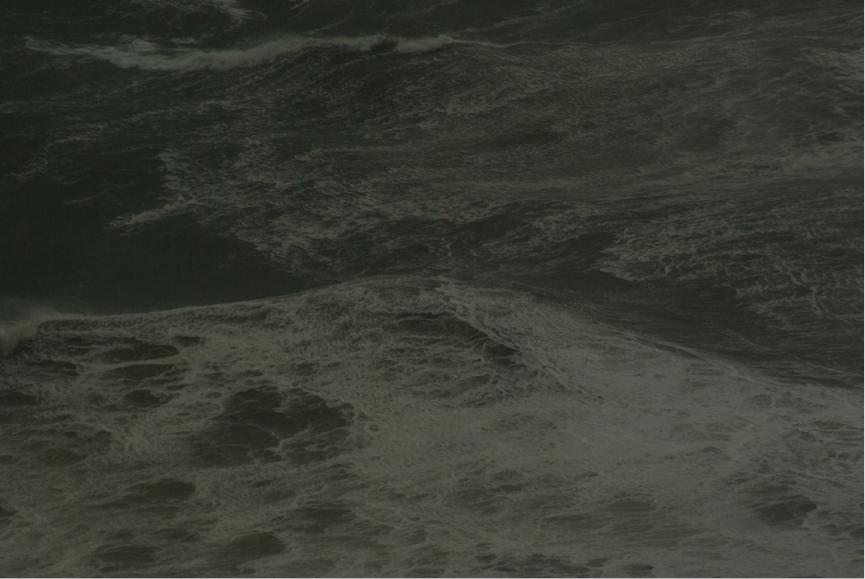 Six useable photographs. The images form works in themselves, but also—in the natural sciences sense of the concept—‘fieldwork’. They will provide raw data for future works, in drawn and painted forms. As a series, the works will investigate the matter, energy, liveliness and agency of that element: an ocean boiled by storm.

But how to communicate the sense of scale? The water surface looks frothed and wind-whipped, so there is a sense of windstrength, but it is very hard to get a sense of the size of those mountainous waves. It was a wild storm: weather records from the Bureau of Meteorology show wind gusts up to 135km/hr in the Illawarra and Newcastle regions (recorded at Wattamolla and Nobbys Signal Station), and wave heights up to 14.9m recorded at a buoy off Sydney Harbour. This was, according to the bureau, the most severe East Coast Low to affect the New South Wales coast since at least June 2007. The State Emergency Service reported the largest response operation in the history of the service. On the beaches below where I took these photographs, storm cut took out all the spinifex dune, right back to the banksias at the foot of the road embankment. The ocean roared, for days, but how to communicate that level of energy in a still image? In eliminating all information other than the matter of the ocean and its energy itself, scale and grounded reference, which might have provided an indication of power, is lost. Does this pared down image then suggest sufficient energy to allow that level of power to be appreciated? This is a question I have not yet answered, but I am continuing to experiment with approaching the construction of these images through new materialist thinking. In 1996, Cheryl Glotfelty, founder of the Ecocriticism movement, wrote the following:

If your knowledge of the outside world were limited to what you could infer from the major publications of the literary profession, you would quickly discern that race, class, and gender were the hot topics of the late twentieth century, but you would never suspect that the Earth’s life support systems were under stress. Indeed you might never know that there was an Earth at all. (Glotfelty and Fromm, 1996, p.xvi)

How far have we as Western artists moved since Glotfelty made this statement? Climate change, with its emphatic social relevance, could perhaps be considered the major trigger for a heightened contemporary focus on the natural world, but many qualities of the networked world and its histories, human and non-human, are being explored, with a realisation of the sixth mass extinction event, plastics in the oceans, ocean acidification, toxic chemistry, ecosystem simplification, and inequality in the distribution of harm amongst the urgent planetary issues being addressed.

Theorising in the new materialist and realist philosophical paradigms, influenced by theorists and philosophers such as Gilles Deleuze, Quentin Meillassoux, Graham Harman, Isabel Stengers, Timothy Morton, Bruno Latour, Jane Bennett, William Connolly and others, has shifted the field of enquiry to a focus on objects, agential matter, contingency, Morton’s concept of hyper-objects and Stengers’ of wonder, and ‘networks or assemblages across which agency and even consciousness are distributed’ (Joselit, Lambert-Beatty, and Foster, 2016, p.3). These strands of thinking fundamentally challenge the centrality of subjectivity, and perhaps even more fundamentally, shift thinking ‘from epistemology, in all of its relation to critique, to ontology, where the being of things is valued alongside that of persons’ (Joselit, Lambert-Beatty and Foster, 2016, p.3). Fundamentally non-anthropocentric, these new modes of thinking have implications for the sciences, sociology, ethics, even economics, as well as for art, and constitute effectively a sorely needed paradigm shift in the history of modern Western thinking’s conceptual relations to the natural world. My hope is that this shift in thinking will effect real political change on a global scale before it is too late to contain climatic and other environmental impacts. Perhaps this is optimistic.

Nonetheless, I find hope in this shift in thinking, and in the potential for transformation that resides in the work of prominent artists: such as Olafur Eliasson, who engages with and also deconstructs the romantic tradition, bringing the natural world into sharp focus; Subhankar Banerjee, who raises his voice strongly for the indigenous inhabitants of the Arctic as well as the biota; and of Ken and Julia Yonetani, who poetically address contemporary issues local to their homelands of Australia and Japan. And there are many others.

The focus has shifted in some of this work to a sense of our inextricable immersion in the world, a sense of entanglement with networks, or in Tim Ingold’s preferred representation ‘meshworks’ of the human and nonhuman. This is an approach that resonates strongly with the theorising of ecology, now championed in art and cultural theory by Timothy Morton, Tim Ingold and others. With the material turn, thinking is moving from a Judeo-Christian viewpoint of command over nature towards what political scientist William E. Connolly suggests is

an ethic of cultivation grounded in care for this world….. a care derived not from a higher source or a transcendental subject….. but through a positive ethos and practices of cultivation… giving… some priority to the human estate, but… by emphasising our manifold entanglements with nonhuman processes (Connolly, 2012, p.399).

Conveying a sense of some of these nonhuman processes is what I am seeking to do in my ocean images. I think it is fair to find hope in the shift Connolly describes, and in the power of artists to aid this shift after almost half a century of environmental activism that has barely dented the machinery of capitalism. Donna Haraway is surely right to use the term ‘Capitalocene’ as an alternative to the more distant and neutral ‘Anthropocene’, and I rather favour the concept of ‘Anthropo-narcissism’ (Cohen 2012) to express the Western world’s collective hubris. But I will continue to find hope where I can.