LECTURE: Of Walls, Borders, and Roads: Posthuman Mobility in the Anthropocene

It is difficult to speak of the Anthropocene and changes to our planet because of the need to shift our view between multiple levels. We cannot stay at one for long. From the micro and the macro, from microbes to biospheres; we must be able to switch lenses from the human to the nonhuman. Often it is scale, rather than levels, that illuminates relationalities in novel ways and demonstrates that it is difficult to articulate these relations in their complexity within traditional disciplinary boundaries and understandings of scale based on smooth capitalist economic structures. Our economies of ecological destruction and the intimacies of shared vulnerabilities exist even if we may not be able to see or count each other across that divide of who, or what, is counted, or even countable, in our human systems. Using the effects of walls and roads on other-than-human communities, this talk will stress that responding to Anthropocene challenges will mean seeing agency in nonsmooth, nonrepresentational ways while simultaneously taking into account the nonhuman and the biosphere, as well as the human.

MASTERCLASS: In this short discussion focused workshop Stefanie will expand on ideas presented in her recent essay “Microbes” from Making Things International 1: Circuits and Motion (ed. Mark Salter, University of Minnesota Press, 2015) and work with students to connect this piece to the larger framework of the Anthropocene. Attendees are expected to have read the text, and will be invited to share their thoughts.

Stefanie Fishel teaches in the Department of Gender and Race Studies at the University of Alabama specializing in political theory and global politics. Her research interests include the gendered and racialized experiences of violence; theories of biopolitics and posthumanism; critical animal studies; and global environmental theory centering on climate change and the Anthropocene. Her book, The Microbial State: Global Thriving and the Body Politic (2017), is available through the University of Minnesota Press. She recently wrote “Politics for the Planet: Why Nature and Wildlife Need Their Own Seats at the UN” for The Conversation.

If it is possible to characterise the response of the humanities to the Anthropocene, I would suggest that there is a central tension that arises when the impulse to adopt non-dualist abstractions is met with the requisite challenge to human agency. Simply put: in exploring the possibility that there is no clear line between self and world we seek to redress our relation to the world, but we must subsequently also question the degree of control we hold over that world. We move towards a non-dualist stance to ‘act’ in the face of the Anthropocene, but in so doing we necessarily question whether we can genuinely ‘act’ at all!

The species-anxiety caused by humanity’s potentially dismal future is an expression of the belief in a genuine, independent human agency. We feel we are responsible and we feel we should act to change that potential future. If this human agency is not genuinely possible, as is suggested by certain monist ontologies, then the anxiety has no cause.

Expiring Object No. 1 is a work that seeks to give expression to a dismal future that is free of anxiety. A battery’s energy reserve will expire, and the flashing LED light will cease to flash at some point in the future. Its dismal future valorises its present beauty. The work thus asks: freed of anxiety, can the Anthropocene valorise the present beauty of the anthropos?

The impulse to explore non-dualist ontologies is evident amongst New Materialist philosophies. But those who cannot subscribe to the notion that everything must have a material existence, still challenge historical and contemporary dualisms, from Descartes to the more modern variants. I propose that the common practice of re-labeling the ‘anthropocene’ is precisely grounded in a desire to challenge these dualisms. Whether it be the Capitalocene (Moore, 2015), Chthulucene (Haraway, 2015), Entropocene (Stiegler, 2015), or Negentropocene (Stiegler, 2015), each new conception seeks to identify the line before or after which a human agency might be possible. As suggested by Wark (2016) this re-labeling might even be understood as a ‘pathology’ of the Anthropocene.

The tension between the inclination to conceive of a deeply interconnected world and the reduction in human agency thus implied, can be seen in the work of Haraway. Consider the passage in which Haraway (2014) argues for a broad understanding of the symbiotic nature of the human relation to the world:

Now consider the paragraph, in which Haraway’s (2015) call-to-arms re-affirms the importance of an assumed human (or ‘mammalian’) agency:

Bacteria and fungi abound to give us metaphors; but, metaphors aside (good luck with that!), we have a mammalian job to do, with our biotic and abiotic sym-poietic collaborators, co-laborers. We need to make kin sym-chthonically, sym-poetically. Who and whatever we are, we need to make-with—become-with, compose-with—the earth-bound (thanks for that term, Bruno Latour-in-anglophone-mode).

On the one hand, there is the insistence that humans cannot be conceived as distinctly separate on any level. On the other hand a distinctly separate agency is assumed that would allow us to execute our ‘mammalian job’ (mammals are largely defined by the presence of a neocortex) with our ‘collaborators’ / ‘co-laborers’, which are now articulated as collaborative, not constitutive. So where is that line? Is it between the material and the ideal (surely not!)? Where is the line, on one side of which to be human means to be a biological / abiotic / (whatever else) complex, and on the other side of which an agency remains possible?

I understand this tension, between the articulation of humanity’s un-separatedness from ‘other’, and the tenacious subscription to the possibility of a separate agency, to be at the core of the humanities’ response to the Anthropocene.

Expiring Object No.1 is an ‘art-object’ whose worth is limited to the life-span of its embedded energy source. To live with this object means to wait for it to die: a matter of months or years. Every flash of its light is both a celebration of its finite energy source and a movement closer to its expiration.

The form and material constitution of the cube is partly inspired by 20th century American minimalism. Its material simplicity is complicated by the embedded electronic device: a flashing LED light and associated circuitry designed to do nothing other than drain the embedded battery. Once the battery has drained, Expiring Object No.1 ceases to function in its designated form and becomes disposable. Its disposability is dictated by its access to energy, not to its solid material presence; now wasted. 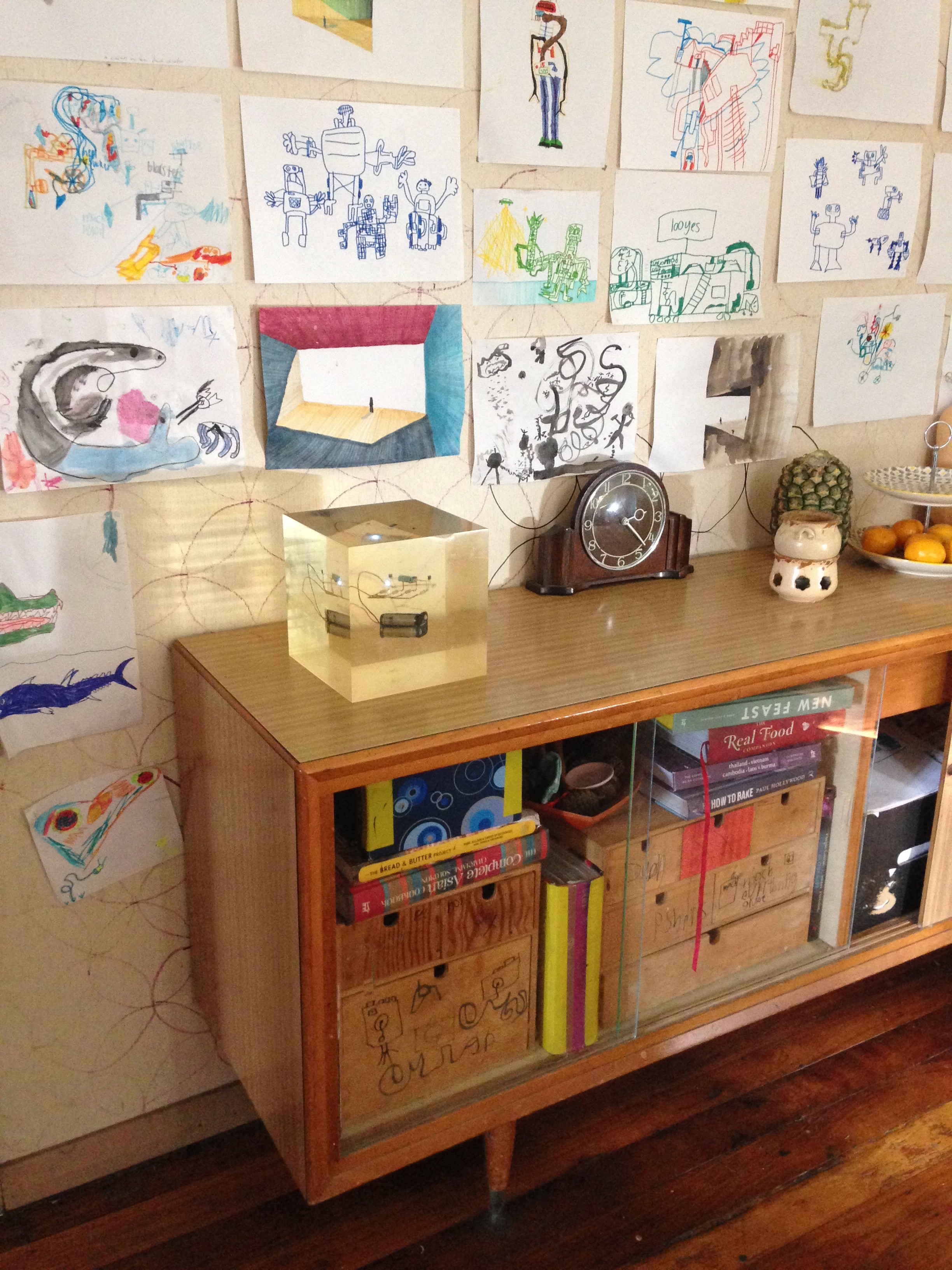 Expiring Object No.1 has now been active for over 8 months. It lives in my dining room. Its presence is often forgotten. When there is little or no ambient light in the room it provides a dramatic ticking glow. It is somewhat like a ticking time bomb whose subject is not the event at the end of the ticking, but the anticipation of that event. Its expiration is anticipated to occur at some point next year.